The Jewish Studies collections at ASU are composed of scholarly literature monographs and journals, literary works that represent different aspects of Jewish life, and documentary and feature films.

Strategic acquisitions in specific areas are made in support of faculty interests, such as Jewish philosophy, Polish-language and East-European Jewish Studies, Holocaust Studies, or Judeo-Hellenistic literature.

This gift of over 10,000 volumes was the largest gift collection ever recorded at Hayden Library. Named after its donors, the collection is particularly strong in Judaism, Biblical Studies, Jewish history, Jewish sermons, history of Zionism and Hebrew. In mid-2013, we learned of the passing of Mr. Zipperstein. Yehi zikhro barukh.

This is a one-of-a-kind research collection; the only repository of Hebrew popular literature outside of Israel. The collection (established 2004) includes serialized fiction in the form of booklets and pamphlets, comic books, Westerns, detective stories, science fiction, romance, and other suspense stories—all mass-produced for distribution in kiosks and newsstands starting in the 1930s. The now-rare pulps were widely read but never systematically collected in libraries, although they represent facets of Israeli culture as much as canonic literature does. The ASU Library is in the process of digitizing the IsraPulp Collection for preservation purposes.

learn more about the collection

This collection was purchased with funds provided by an anonymous donor, and includes hundreds of books, photo albums, and pamphlets, telling the story of local, national and regional Jewish communities from around the world. These include European countries; Muslim lands and the Horn of Africa (Ethiopia, Libya, Egypt, Morocco, Turkey, General North Africa, Arab Lands); the Americas (United States, Canada, Brazil, Argentina, Other Latin America & Caribbean); South- and East-Asia; and Sub-Saharan Africa (South Africa, China, India, other Asian countries).

Marvin Fisher, professor emeritus and former chair of the Department of English at at ASU, donated this historic collection comprised of more than 130 historic photographs from Poland, the collection. Fisher calls the collection "an assortment, really," belonged to his mother, Helena Goldman. The photographs were taken in Europe before 1930, and most come from the towns of Gostynin, Gombin or Kutno. Many are in the form of postcards that were given to his mother with inscriptions urging her to remember the devotion of friends and relatives in nearby towns.

This collection focuses on Jewish education and separation of church and state. Dr. Drachler (1912-2000) led the Detroit school system as superintendent (late 1960s) and established the Institute for Educational Leadership at George Washington University and Stanford University. The collection embraces many rarities, including dozens of 17th and 18th century religious tracts and pamphlets. 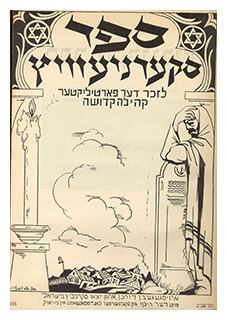 This collection consists of over 200 rare Holocaust memorial books complied jointly by survivors of East-European Jewish towns (shtetls). These books recount the history of specific towns via interviews, personal memoirs, photos and drawings, usually in more than one language, primarily Yiddish, Hebrew and English. Yizkor books serve as living monuments for those perished and provide rich primary sources for scholars.

Donated by a Holocaust survivor who fought in the War of Independence in 1948 and was among the founders of Kibbutz Sede-Boker in Israel. This collection is comprised of maps, tour guides, Israeli Defense Forces (IDF) brochures and Hebrew song booklets.