Mr. Harold Minuskin has generously established the Sonia Minuskin Memorial Endowment as tribute to his mother, Sonia Minuskin's, bravery and tenacity during the Holocaust, and as a commitment to research, teaching and education related to the World War II Holocaust and study of anti-Semitism.

The fund will ensure that future generations understand the terrible consequences of the Holocaust and anti-Semitism, by sponsoring an annual undergraduate essay contest, and other special educational projects. Your secure online contribution will help increase the impact of the Sonia Minuskin Memorial Endowment for Jewish Studies. We are grateful for your support! 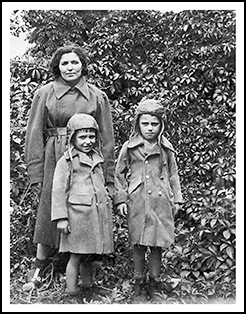 By escaping the Nazi massacres in their Belorussian hometown, Sonia Minuskin saved the lives of her two young children, as well as her own. They avoided capture, and fled into the nearby forests where she joined with Jewish Partisans. Sonia’s husband was a Partisan fighter battling the Nazis. The family lived in hiding for nearly three years, until their liberation by the Russian army in 1944.

Sonia Minuskin cherished her children and had a warm heart, always willing to help those less fortunate during the wartime years. After the war, she and her family immigrated to the United States. Despite all the hardships she had suffered, she retained her good nature, sense of humor and commitment to her family throughout her life. She passed away in November 2008 at the age of 102.

Learn more about the extraordinary life of Shanke (Sonia) Minuskin, at Holocaust Memoirs: "My Children, My Heroes, Memoirs of a Holocaust Mother"